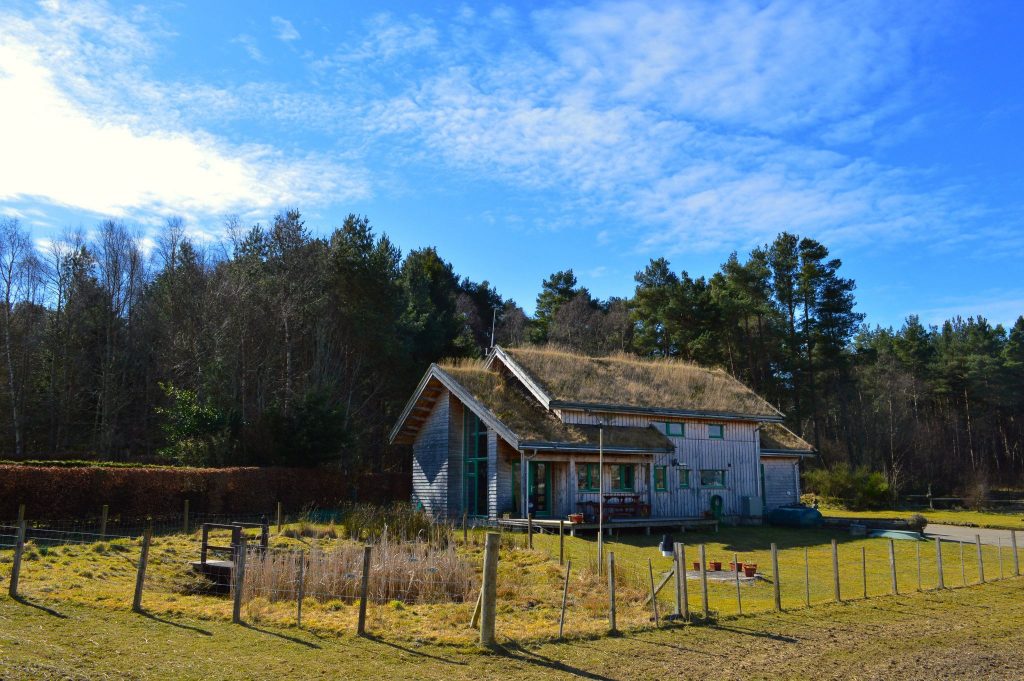 After moving in December 2001- we needed to plan a base to operate Glachbeg from. Ideas ranged from a reconstruction of a bronze age round house, through a log cabin, and eventually we settled on a much grander project of constructing an eco building. Bob has had some previous experience with straw bale buildings, but also knew that an architect would be needed to steer such an unusual building through the formal planning process. Bob then begun discussions with Neil Sutherland (now with his company Makar (whose website is well worth a look: Makar)) who persuaded us to work with local timber instead. Construction begun in October 2004 and completed in April 2005.

Construction took place on a self build basis with Bob, his family and various tradesmen carrying out various tasks. Neil’s team erected the frame, and most of the rest was done with a local joiner- who ended up doing much more than he had expected.

The principles of the building:

The frame was created from Douglas Fir from the Novar estate , and the majority of the rest of the timber was purchased as trees from Blackstand on the Black Isle, brought in here and then milled on site with a portable saw mill (it seemed like a good idea at the time). Joinery timber did have to be bought in through normal suppliers and the timber double glazed, e- coated, argon filled windows came from Treecraft in Dornoch. The most heavily glazed side of the building faces south so that we can get most benefit from light and heat, which also heats up the insulated concrete floor slab that radiates heat when the sun goes down. There is also a solar panel for hot water on the south facing side of the roof. The roof itself is turfed.

As is often the case when you start to consider things carefully, it all gets much more complicated. For example, we don’t have a photovoltaic panel on the roof as we use a small amount of electricity, which makes the cost effectiveness of such an installation ineffective. On top of that, the location of the building near trees reduces solar gain – but there were other factors affecting the location of the building that had to be considered!